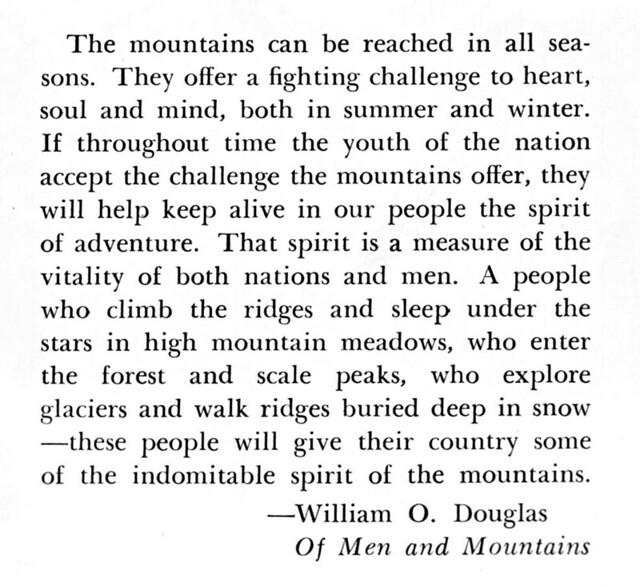 Of Men and Mountains

“Mountains,” said United States Supreme Court Justice William Douglas, “have a decent influence on men.” I would have to agree. Mr. Douglas spent more time on the US Supreme Court than any other Justice, and and in his autobiography “Of Men and Mountains”, he shares a lifetime of stories and anecdotes that probably put him in the lead for the Justice with the most amount of time outside as well. His ties to the Cascades are what initially piqued my interest, but he’s actually quite a character worth spending some time reading about. Consistently liberal, he became known on the court for his fervent support of civil rights and liberties, particularly the First Amendment guarantees of freedom of speech and... There still are rushing rivers in my dreams;There still are grinding boulders in the streams;      There still is mountain madness,      Thund’ring down in reckless gladness—Tho I’m safely in my bed in town, it seems. There is still a shining world of ice and snow;There still are steps to slog and miles to go;      There still are fragile bridges,      And windy fearsome ridges,—Tho the city sounds about me all say “No…” There is still a threat’ning avalanche to round;There still are blinding fog banks, summit bound;      I can find no safe belay      Yet the suns ays “Do not stay”…—Then I wake to find I’m home on level ground. I’ll be toiling up sublime eternal heights,I’ll be threading huge seracs by candle lights,      I will pause where none may... P is for Petzoldt

Having lived now in Wyoming and Montana for nearly 8 years, I've come to really appreciate and love the climbing history that surrounds me. I recently finished a wonderful book called "Teton Tales and Other Petzoldt Anecdotes", which is a brief memoir of sorts from Paul Petzoldt. It was a quick read, but only because the stories were so close to home, and so comfortably shared by the man who lived them. Petzoldt started climbing pretty early and had a good common sense approach to safety and order which manifested itself in the climbing commands still in use by climbers today around the world ("On belay!"). He pretty much set the standards known today as minimum-impact camping, and taught those principles... T is for Tumpline

What's a tumpline you ask? To put it simply, tumplines are straps used to carry heavy loads using the strength of the spine, and have been around for a long, long time. Do they work? The fact they've been around for so long and spread out across multiple cultures and geographic regions point to yes. They definitely have a place in paddling history, as evidenced by their use among the voyageurs as they carried heavy loads over portages. Chouinard likes 'em, and actually sells them online. Might be worthwhile to experiment a bit with one and see if it can’t straighten out my posture a bit.

Path of the Paddle

A great little piece from Canadian filmmaker Bill Mason, who was also known as "the patron saint of canoeing." Noted primarily for his canoeing books, films and art, his contributions to the sport also included techniques and approaches to canoeing on rivers, specifically in whitewater situations. His films are available to watch online at the Canadian National Film Board website.